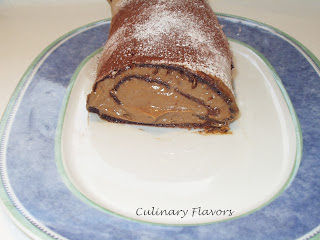 I told you that I had some crème patisserie left in my fridge from the éclairs. What I forgot to tell you is that, I had 6 egg whites left from my making of that crème. So, there I was trying to find what to do with those two ingredients that were stuck in my fridge. And then an epiphany came to me why don’t I open Stelios Parliaros’ book “Sweet Alchemies” and see, if I can find a recipe that combines these two. I told you he never fails me. I found this recipe, which was exactly what I needed. Plus the fact that the only thing I had to prepare, was the meringue.
As always the recipe was exact and very easy I must say. I know logs are made usually during winter and especially during Christmas, but is this a law or something? No, of course not. So, I went ahead and did it. And let me tell you if you put it in the fridge for couple of hours, is the best thing for a warm spring afternoon.
As always my son was the first to eat it and he said that it was reaaaaally good. But what did you expect from a child 7 years old adoring chocolate already.
Anyway, I think it is an easy and tasty recipe.

Ingredients
For the chocolate meringue
6 egg whites (the recipe called for 5 but I used all 6 I had and it wads fine)
250 gr. sugar
Pinch of salt
15 gr. cocoa powder

Half dose of the crème patisserie I used for the éclairs listed below the soufflé. 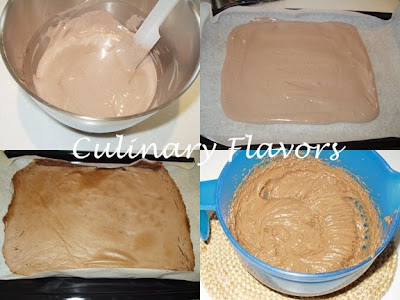 In a mixer bowl put the egg whites, the sugar and salt and start mixing, until it forms a meringue that is smooth and elastic like a cream. We do not want the meringue to become stiff like the one we use in lemon pies. It should look more like a pudding. 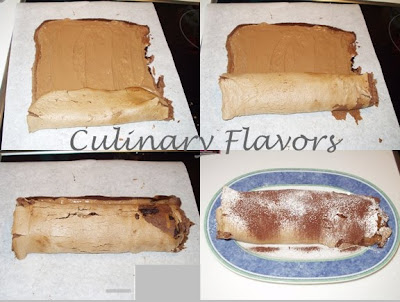 Preheat oven to 170°C. Take a baking sheet and put a parchment paper. On the paper place the meringue so as to form a rectangular with dimensions 25cmX30cm. Put it in the oven and bake for 20 minutes. In my oven it took 18 minutes. The meringue must be soft when you take it out. Let it cool for 5 minutes. Take another parchment paper and flop the baked meringue to it. So now you have a sandwich formed by the two parchment papers and the meringue in the middle. Now, carefully remove the parchment paper which is on top and is the paper on which you have baked the meringue. Discard it. Spread the crème patisserie after you have whisked it for couple of minutes as I told you in the éclairs recipe. Now start rolling the meringue to a log as in pictures. Dust with caster sugar, or cocoa, or both. It was really funny but the meringue tasted like a tortilla and it was really good. Good Luck!
by Katerinain Chocolate, Sweets