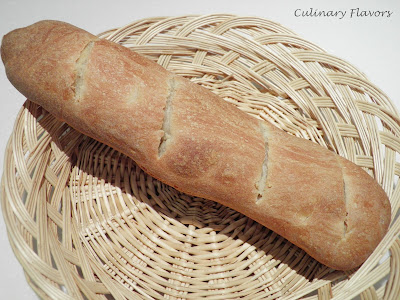 Bread, the primary and very important food for humans from the Neolithic era. It is considered to be one of the oldest types of prepared food. It is amazing how bread in many forms plays a major role in most cultures and nationalities. Bread is a basic and very nutritious form of food, plus it is easy to be made with just few ingredients. 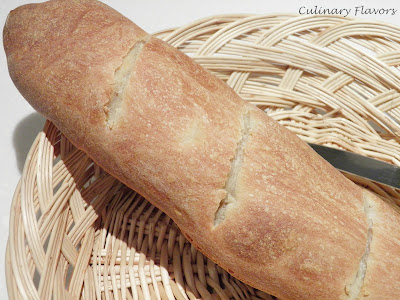 I was craving for days fresh and warm bread, but during the week this is quite difficult for me. I don’t have the luxury of time to just follow all the steps necessary to a successful loaf of bread. But weekends are a totally different thing.
So, yesterday I decided it was the time to just satisfy my primary need for bread. Couple of days ago I bumped into a recipe for French baguettes at King Arthur’s Baking Banter and ever since their picture was haunting me and was stuck in my mind for good. I decided to give in and go ahead and try making these baguettes. That was a great idea! The baguettes were simply perfect. I like all types of bread soft and crunchy, but I love more the latter. If you like your bread to have a crunchy crust, then I totally recommend this recipe. The baguettes were divine, crunchy, tasty, super! 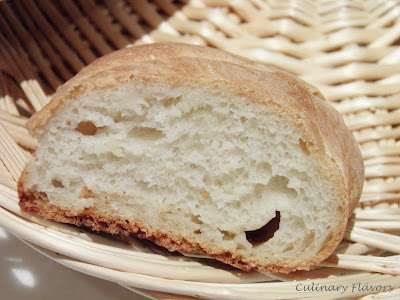 My husband even asked me to make him a sandwich to take to work. In my photos I just tried to show you how good they were I hope I succeeded.
Anyway, I am giving you the recipe and the steps to make these beauties. It is not tiring, it just requires time for the dough to rest, but trust me it is all worth it.

For the Dough
All of the starter
1 tsp instant yeast
1 cup + ¼ cup lukewarm water (the recipe called for 1 cup but the dough was too stiff)
400 gr. all-purpose flour
1 ½ tsp salt
1 tsp sugar (sugar was my addition, but I think it gave the loaf a little sweet flavor) 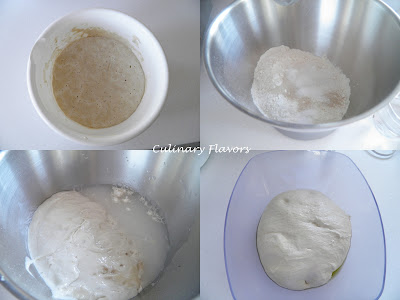 For the starter
Put everything in a bowl and whisk until they are incorporated. Place a clean towel on top and let it stay at room temperature for 14 hours. It is better to do this the evening before the morning you want to make the baguettes.

For the dough
In the mixer bowl put the starter and all the ingredients of the dough.
Start with the paddle for a few seconds until all the ingredients are incorporated and then change to hook. Knead for 5 minutes on speed 2.
Oil a bowl and place the dough inside.
Cover with the towel and let it rise for 1 hour. After this hour deflate it and let it rise again for another hour. You do this step once again. This procedure requires as a total 3 hours.
We divide the dough into three pieces and let them rest for 15 minutes. After the 15 minutes we flatten each one to a rough rectangle. 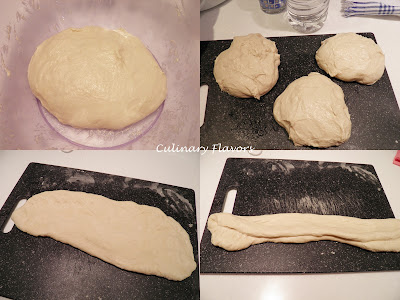 We fold it over lengthwise and seal the edge with our fingers. We flatten it again and we fold it again and seal it the same way. We turn the seam side down and we roll gently.
We place the baguettes on a parchment-lined baking sheet, cover them with a towel and let them rise for about half an hour.
In the meantime preheat the oven to 200° C.
After this half hour, we spray them with warm water and we make three diagonal slashes with a sharp knife in each baguette.
Place them in the preheated oven and let them bake for 20 to 30 minutes. Be sure to bake them long enough. They should appear almost charred in spots. Good Luck!

I am linking this to to Homemaker Monday, Mouth Watering Mondays, Your Recipe, My Kitchen, Made by You Monday, Tuesday Night Supper Club, Tuesdays at the Table, Tempt My Tummy Tuesday and Made From Scratch Tuesday.