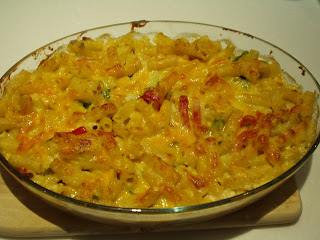 This weekend I made two dishes, a sweet and sour pork and this pasta. I am not going to post the pork recipe, since I did not like it. As I told you I am only posting recipes worth the trouble and effort. This one is great. Although it is a souffle, it is fairly easy to make, plus it is light and very tasty. Originally, I found the recipe in Vefa Alexiadou’s site, but I made my own alterations, so as to adjust it to our liking. The original recipe can be found here for those of you who speak greek.

Boil the pasta according to instructions. In a skillet on medium heat melt the margarine and sautee the pepper and scallions until they become tender. Add the flour and continue sautee them for a minute. Throw the warm milk all at once and whisk vigorously, so as not to for the flour to make lumps. Lower the fire a little bit and let the sauce boil until it becomes slightly thick. Now be careful, we do not want it to be very thick, because we have to add the cheese too. If, on the other hand, is very runny as it was in my case, I dissolved 2 tsp corn flour in 2 tbsp water threw it in. Now after the sauce has reached the correct texture we throw the broccoli, pasta, dried basil, dried oregano, salt, pepper, 1/2 cup regato, 1/2 cup emental, 1/4 cup parmigiano and 1/4 cup cheddar. Mix everything. Empty it in a buttered pyrex 25X30 cm add on top the remaining cheese and bake it in preheated oven at 175C for 30 minutes, or until golden brown. Good Luck
by Katerinain Italian, Main Course, Pasta