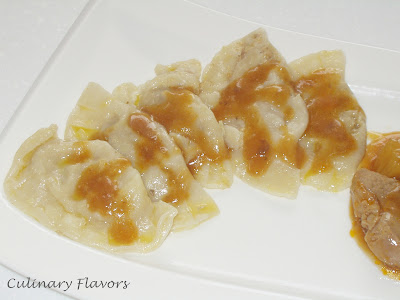 I had this enormous desire to make pasta. This is not something that happens very often I must admit, since making pasta is not an easy task, not at all. It requires time and patience and effort and a lot of cleaning afterwards. Anyway, I wanted to make some pasta but not any type, something stuffed. So, I decided to make stuffed ravioli. Stuffed with what? I didn’t have all these classic things with which ravioli are stuffed normally. So, I had to improvise a little bit and I came up with Ravioli Stuffed with Mushrooms and Apple. They were divine. I will definitely make them again. I will use fresh mushrooms as I didn’t have this time and used canned. That’s the only thing I will change. Other than that they were perfect. We really enjoyed them. I also made Polynesian Pork Tenderloin the recipe of which will follow in my next post. 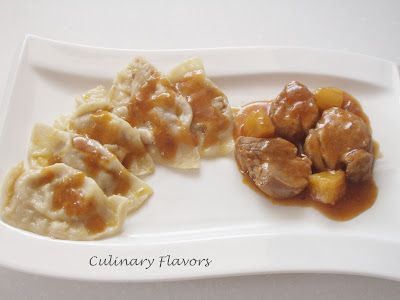 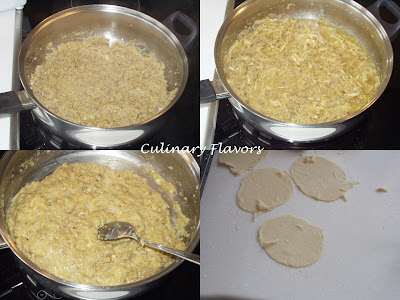 Instructions
For the dough

Put all the ingredients for the dough to your mixer. Mix until a ball is formed (I used the bread machine). If the dough is too tough add water, tsp by tsp. If the dough is sticky add flour, pinch by pinch. I didn’t use eggs in this recipe. It worked just fine and with less cholesterol.

In a skillet add the olive oil and sauté the mushrooms and onion at medium heat. Add the sweet wine and all the herbs. Sauté until the liquid is absorbed and then add the milk. Sauté until most of the liquid is absorbed and finely add the cheese. Let the filling cool and then proceed with the making of the ravioli.
For making the ravioli you can either use the pasta machine or you can roll the dough with the rolling pin. In any case flour the surfaces on which you will roll the dough. I made them in the pasta machine, but I think next time I will try the rolling pin. Then I used a mould I have for ravioli. Basically, I cut the dough in rounded pieces put them on the mould, add I tsp of the filling, brush them with a little bit of water and close them.
Cook them in gentle boiling water until they come to the surface. I am sending this to next week’s Presto Pasta Nights an idea of Ruth Daniels, which is hosted by Claire of Chez Cayenne. Also I am linking this to Family Food Fridays you can go there by pushing on the widget on the sidebar.
by Katerinain Italian, Main Course, Pasta