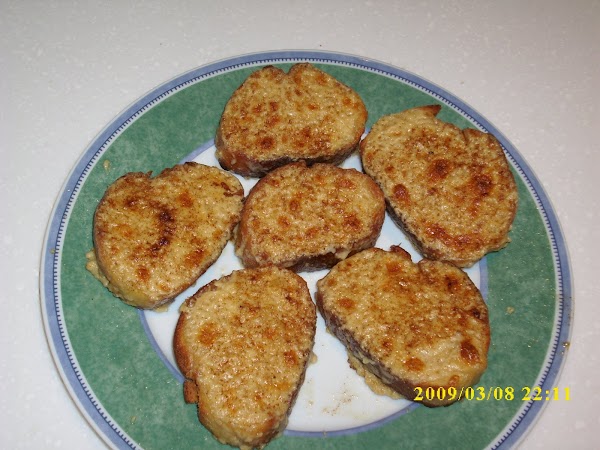 A few nights ago I was hungry but not hungry enough to eat a full meal. Since I was a child I was collecting recipes from magazines, books or any other place. When I am not sure what I want to make I go through this collection and usually I find something interesting. So, I started leafing through my recipes and I came across this one. It looked very tempting and easy for a weekday night so I decided to make it. Since I have only the page of the magazine I cannot recall its name but I can tell you that this recipe comes from Jacqueline Saulnier.It was really good and after a brief survey I discovered that there are more versions of this dish. Perhaps next time I will try another one. Let’s go and make it.

Put the 25 gr. of butter in a baking tray and turn on the broiler on your oven. You bake the slices of bread until golden. Take them off the oven. In a skillet over medium heat throw the rest of the butter, the grated cheese, the beer, the mustard, the cayenne and the worcestershire sauce. Mix until smooth. In a bowl, mix the egg yolk with some drops of beer. Remove the cheese batter off the stove and slowly add the egg. What I do in order for the egg not to be cooked is, I take one tablespoon of the batter and incorporate it to the egg. So the egg’s temperature adjusts to the batter’s temperature and then I throw the egg to the batter. Now when you have done that turn on the broiler again or you might as well have left it turned on from before and after dividing the batter to the four slices of bread put them in the oven until the cheese above becomes golden. You must eat them hot. Good luck.