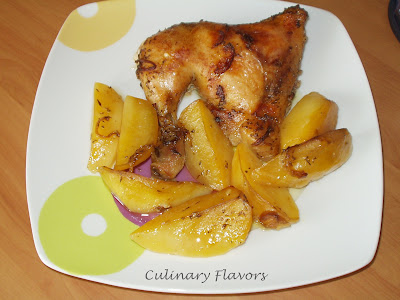 Do you remember couple of posts before the Lemony Chicken in the Pot? This is the second way of cooking lemony chicken in Greek houses. It is a very easy casserole dish; its preparation takes no more than 15 minutes. Its cooking time though is about 2 to 2 ½ hours, but this is not a problem, since you just put it in the oven and you’re done. This is a very common dish in Greek houses and we eat it very often. Actually this is the very first dish; I learned how to cook back when I started taking my first steps towards cooking. I remember the first time I attempted to make it, I just put the garlic cloves unpeeled. It was really very funny. Everybody of course was very polite and didn’t say anything. I just found out when an unpeeled clove arrived at my mouth. It was hilarious. The good thing was that only family had the privilege of tasting it. So it was an internal affair. Anyway, thank God I had only put four. Apart from that misfortunate little incident the dish was a big hit. Since then a lot of water has flown and now this is one of the easiest meals I can prepare. 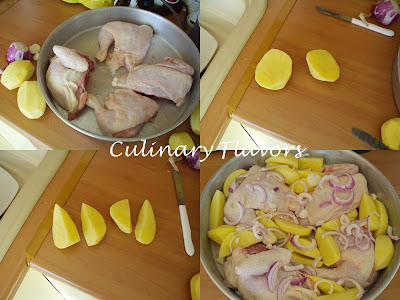 In a pan or in a Dutch oven spread the garlic cloves. Above them arrange the chicken pieces and the potatoes. Add the onion rings. Throw the olive oil and the water. Add the salt, oregano and paprika. Preheat oven to 200° C. If you use a covered pan just cover it and put it in the oven. I am at my cottage and I do not have all the necessary kitchen tools here. So, I just used a plain pan and I covered it with parchment paper. Bake like this for 1 to 1 ½ hours. Uncover throw the lemon and continue to bake until all water has been absorbed and the food has remained with its liquids and oil about 1 hour. 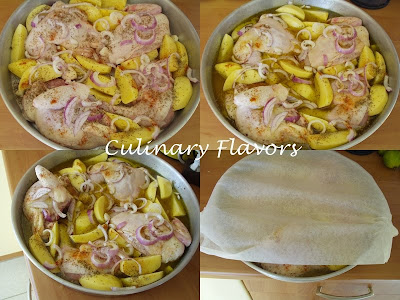 I am sure you will be thinking that the potatoes are too large, but trust me with the water the potatoes boil at first and then they are baked. So, the end result is extremely soft potatoes that although baked, they melt in your mouth. My mother is famous in the family for these potatoes. I hope you will enjoy it.
by Katerinain Chicken, Greek, Main Course