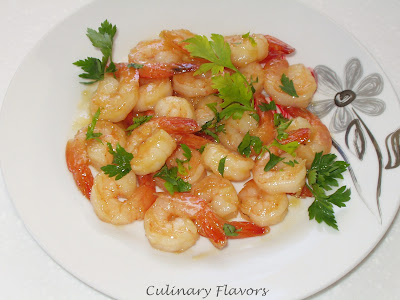 I am pretty busy during the week with work, kid etc. Thus, the only time I have to cook and test, so as to post about it, is on weekends. I was intrigued by Joanne’s Regional Recipes competition for a dish from Vietnam. I think most people know Vietnam from its war with the United States and the numerous movies which show the big wound this war has left to the latter. But what war has failed to achieve, commerce has. US now is the main trading partner of this far away country which is squeezed between Thailand, Cambodia, China and Laos on one side and the sea of South China on the other. It is a communist country, but it has made several openings to the capitalistic system. I am sure that it would be very exciting and adventurous to visit such a country. I doubt if I ever will, but I made this dish and for a moment I felt that, I was sitting in the Vietnamese jungle eating these shrimps. This is my contribution to Joanne’s Regional Recipes with theme this month the country of Vietnam. I found the recipe in Recipezaar and it was really fun making it.

Heat 2 tbsp of peanut oil in a skillet and sauté the onion and garlic until golden. Remove from heat and set aside.
In the wok heat in medium to high heat the other 2 tbsp of peanut oil and add the sugar and shrimps. Stir for a minute and then add the shallot, the garlic, the water, the fish sauce and the salt. Cook until the shrimps are done and the wok is almost dry about a minute or so. Transfer to a plate and garnish with the cilantro. Serve immediately.
Just an idea. Since I am on a diet after I took a picture of the shrimps I threw them on my salad bowl and I ate them with my freshly cut salad and it was super. 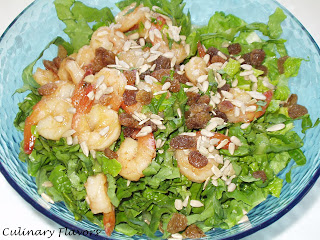