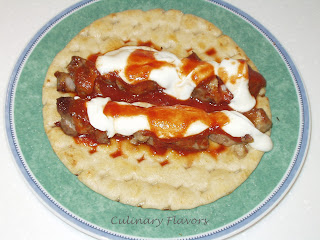 Greece as a country, throughout its history, has suffered wars, civil wars, dictatorships, and occupation. For 400 years, between 1453 when Constantinople was conquered by the Turks until 1821 when Greeks started their fight for liberty, Greece was under Ottoman Empire. In these 400 years we managed to keep our language, religion and coherence as a nation almost intact from influences. Nevertheless, after all these years of slavery, some words and dishes from our neighbors managed to penetrate into our everyday language and cuisine.
Giaourtloú is one such case. It is a Turkish dish and very tasty. Originally is made with ground lamb formed as a kebob. I am not very fond of lamb and apart from that, I had these souvlaki that I wanted to cook. So, I just improvised and I used them instead of ground lamb. I made a red sauce not very hot, you all know about my sensitive stomach and a yogurt sauce. In the original version the red sauce is spicy and the yogurt sauce is used to counterbalance the hotness. This is a more “child-friendly version” and I can tell you it might not be as hot, but it sure was a big hit among all members of the family including my mom, who is a very good cook and a very strict judge. So, let’s go and cook it. 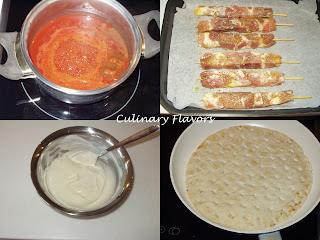 We first marinate the souvlaki. Mix the olive oil, the chopped garlic, salt, oregano and cumin. Place the souvlaki in the marinata and let it marinate for at least one hour in the refrigerator. In the meantime you can prepare the sauces.
For the red sauce
In a pot put all the ingredients of the red sauce and bring to boil. Lower fire and let it simmer for half an hour.
For the yogurt sauce
Again for the yogurt sauce, mix everything and put it in the fridge.
When the souvlaki has marinated take them out of the fridge and place them in a pan and turn on the broiler. Broil them until well done.
For the pitas
Take a skillet and put a tbsp of butter in medium-high heat. Place the pita and let take a slight golden color from both sides. Take it out and do the same with the rest.
Assembly
On a plate place the pita, above it put the souvlaki and spread about 3 tbsp of the red sauce. Above the red sauce spread 3 tbsp of the yogurt sauce. Or you can do it the other way round. It doesn’t really matter, because when you eat it, the two sauces mix. It is an easy dish with a few different components though. Do try it; I am sure you will love it. And if you want it hot, you can always add pepper on the red sauce. Enjoy!
I am sending this to Julie’s Family Food Fridays. Check to see other submissions too.
by Katerinain Greek, Main Course, Meat, Pork