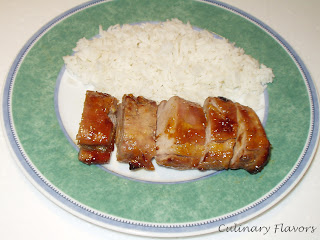 I saw this recipe on Chow and I liked it a lot. First because of its simplicity and second because I really like the sweet and sour flavor in my meals. The recipe uses basic ingredients that can be found in any home at any time. It called for apricot preserves; I didn’t have, so I used peach marmalade. The end result was absolutely fantastic. My husband commented, and I agree with him, that the pork tasted like a ham. It was soft and this sweet glaze added to it a great deal. I will be making this recipe again for sure and this time I will keep some of the marmalade mix to make a sauce to accompany the pork. I have the need for more sweetness in my life, can’t you tell? Anyway, I am giving you my version of the recipe and hope you will like it too. The original can be found here.

Preheat oven to 200° C. Take the 2 pieces of pork and cut 3 slits to each, 6 on total, and insert the garlic pieces. Take a pan and place a parchment paper big enough to fold the pork like a package. Place the pork on the parchment paper. Coat it with the olive oil and put salt and pepper. Let it stay until your oven is heated around 20 minutes. Add the wine, close the parchment paper like you do with an envelope and put it in the oven. After 20 minutes, take it out, open the paper and turn the meat upside down. Fold it again and place in the oven for another 20 minutes. In the meantime, in a bowl, mix the marmalade, cumin, lemon juice, salt and pepper. After the forty minutes take the pork out of the oven, unfold it and discard the juices produced and the parchment paper. Place the meat again on the pan and spread half of the marmalade on top. Put it in the oven and let it cook for 15 minutes.

After that turn it upside down spread the rest of the marmalade and cook for another 15 minutes. Finally turn the broiler on and cook both sides 10 minutes each, spreading the marmalade that exists in the pan every five minutes. Be very careful at this stage. Do not leave your pork unattended because it is very easy to be burnt. When you see the pork taking a nice dark color take it out of the oven. Let it rest for five minutes and then cut to pieces. I served it with basmati rice (my favorite). You can serve it with whatever your heart desires. It is a little bit fussy in cooking but believe me; it is certainly worth the effort. I am sending this to Family Food Fridays. Link up from the widget on the right to see other meal ideas.
by Katerinain Main Course, Meat, Pork