Macaroni and Cheese my Way 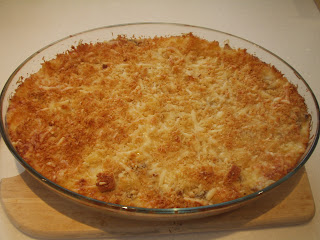 Although this recipe started just as any other recipe it then became an adventure. I found this recipe in Smitten Kitchen. Originally this recipe comes from Martha Stewart. Yesterday, I just wanted something light, because my husband suffered from stomach ache and, as I went through my recipe folders, my eyes fell on this one. I remember when I was studying in the States, I once bought a pack of mac and cheese from Shop and Save, but I wasn’t thrilled. I never tried it again. But now that I was at home with my husband asking for something not as heavy, I thought that it would be a good idea to try again, this time with a homemade recipe. First of all, I halved the recipe, as it was too large a quantity for us. Secondly, I added mushrooms which I love, thirdly I put three different types of cheese and finally I added an egg. It was really good. If you want something easy and tasty during weekdays, something even a difficult kid will eat, well that’s the one. But, enough with talking let’s go and make it.

Macaroni and Cheese my Way

Instructions
Melt 1 tbsp of margarine and toss it with the bread chunks. Set aside. Preheat oven to 175 C. In a pot melt the rest of the margarine in medium heat and add the flour. Stir for 5 minutes and then add the milk. Add the nutmeg and mix vigorously. Continue to stir until it starts to thicken. Remove from fire and add salt, the egg and then the cheese. In the mean time boil the pasta al dente. When ready throw the macaroni and the mushrooms into the cheese sauce and mix until all macaroni has been covered. Butter a heat proof pan and sprinkle with the italian breadcrumbs. Throw the macaroni and above it spread the bread chunks and 1/2 cup cheese anything you like. Bake until golden around 30 minutes. You can substitute the canned mushrooms with fresh but before you throw them to the cheese sauce you must sautee them for 10 minutes until they become soft. I am sending this to Presto Pasta Nights created by Ruth Daniels and hosted this week by Kirsten Lindquist.