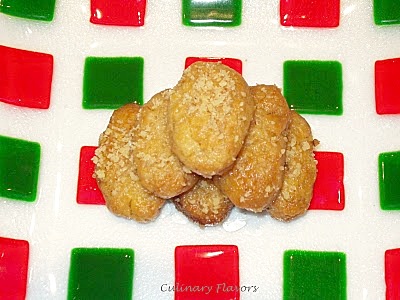 Ok, I am sure you noticed the part 1 in my title. This is because I am going to give you two recipes for melomakarona. One by Stelios Parliaros and one by Simone Kafiris. I told you before how much I admire Stelios Parliaros, not only because he is a great pastry chef, but also because his recipes are very exact and the results are guaranteed. This year I used his recipe for melomakarona for the first time and as always they were great. The other recipe comes from Simone Kafiris and her cookbook “Anthologies of Greek Sweets”. This is the recipe, I use every year. Now the difference between the two, which are both excellent, is in the crunchiness. Parliaros’ melomakarona are crunchy outside and soft inside. On the other hand Kafiri’s are crunchy in and out. It’s up to you to decide. It is all a matter of liking. I can only tell you that both are tried and true. 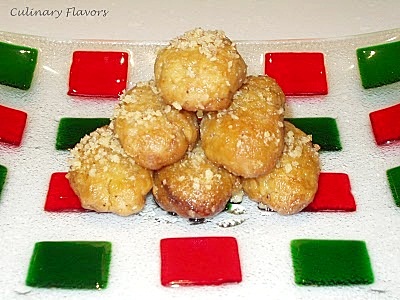 Christmas is on its way. Having a young child sure makes Christmas come earlier than ordinary. We started writing letters to Santa, who by the way in Greece is called Saint Basil, since the beginning of November. Also Christmas DVD’s and Christmas cd’s were dusted mid November. As you can understand I was in the Christmas mood willy-nilly since November. I couldn’t do otherwise. Every year, since my son grew old enough and understood what was going on around him, Christmas always started earlier for us. By the end of Christmas time, I am so overwhelmed by it, that I am glad I will have another one year until it comes again. But this fullness is not here yet and I am eager to give you the recipes for these beautiful Greek sweets. 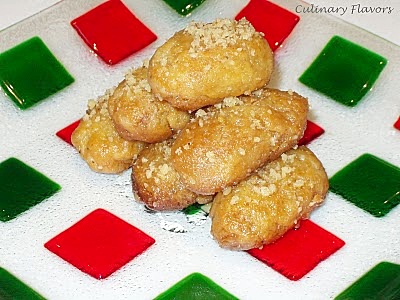 So, to give you an idea of what a typical Greek family does during that time, I will give you a brief description along with the recipe. Before Christmas we make Melomakarona (recipe follows), Kourabiedes (recipe will follow next year) and Diples (recipe will follow in my next post).
On Christmas Eve, provided that you have money to spend which I highly doubt this year with this economic crisis that has felt upon us, either we go out for formal dinners or celebrate at home. Now on Christmas Day we celebrate with family. We gather at homes and make turkey with stuffing, not like the Thanksgiving, a different one. This year I am not having lunch at my home. We will go to my mother-in-law’s but I will put my mom to make the stuffing so I can post it for you. So let’s start our festivities by giving you the recipe for melomakarona. 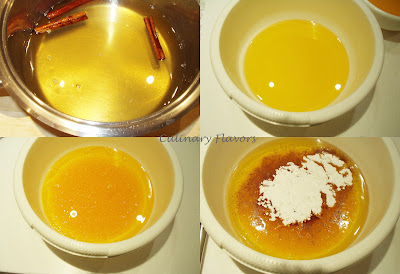 For the syrup
In a pot we put the water, sugar, orange and cinnamon sticks to boil. We boil for one minute and we remove from stove. We throw the honey and let it cool. 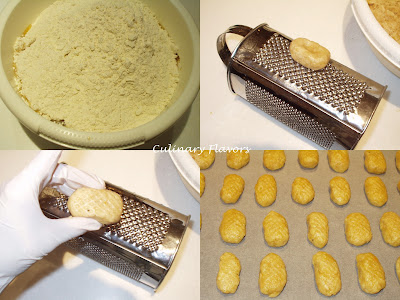 For the melomakarona
In a big bowl we throw all liquids including the melted butter. We add the caster sugar and all the spices and orange zest and mix a bit. Then we throw all the flour. We mix just until everything is incorporated. Now here is the secret to success. We do not over knead. Just until everything is mixed up to form a nice dough. Otherwise the dough will become very stiff and the melomakarona will have other usage, for example, if we want to use them to open someone’s head. 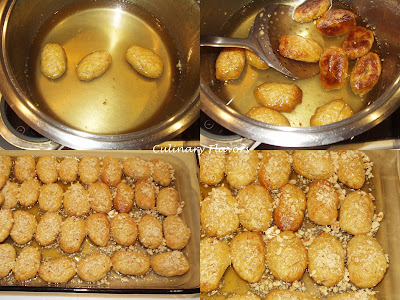 We take a little dough in our hands, we make it an oval and we use the cheese grinder to give the shape we want (just follow the pictures). We place them in a pan covered with parchment paper and bake in a preheated oven at 175° C for about 20 to 30 minutes or until golden. Now immediately when we take them out, we put them in the cold syrup. And let them swim for a minute. We remove them from the syrup, place them in a big plate and spur some ground walnuts on top. Not that difficult, right?