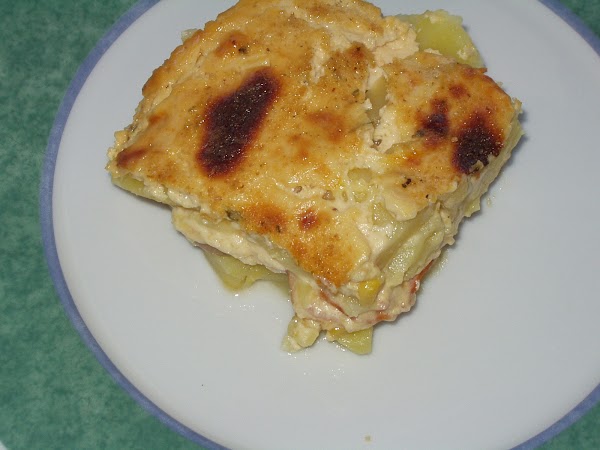 First of all I would like to thank everyone who has sent me a pomegranate recipe via e-mail. I will try to make as many as my bulk of pomegranates allows me. Today I am going to make potato suffle. It is an easy meal very yummy but a little bit time consuming. But as you know good things in life take time and that’s the case with this souffle. It needs many ingredients but the result will compensate you for the time and effort. Now let’s proceed.

1 tbsp sugar
230 gr. mushrooms
140 gr. corn kernels
4 tbsp breadcrumbs italian style, divided
100 gr. butter
1/2 tsp garlic powder
1/2 tsp onion powder
200 ml heavy cream 12% fat
400 gr. evaporated milk
1/2 snipped chives
1/8 ground nutmeg
1 cup regato cheese
1 cup emmental
1 cup cheddar
1 cup parmigiano
5 slices of ham cut in chunks
1 pack of cream cheese
Instructions
There are three stages in this recipe.
First we caramelise the onions. Melt 2 tbsp of butter in a skillet in medium heat throw the onion rings and let them cook for 20 to 25 minutes adding the sugar. Throw the mushrooms and let cook for another 10 minutes.
In the meantime boil water, add salt and put the potatoes, pilled, to boil. Do not boil them too much as they will continue to cook in the oven. When done cut them lengthwise in slices.
Meanwhile make the sauce, by putting in a skillet the 100 gr. of butter, the cream cheese, the heavy cream, the evaporated milk, the garlic powder, the onion powder, the chives and the nutmeg. Let it cook in medium heat for 10 minutes and then throw 1/2 cup of each cheese.
Preheat oven to 200 degrees celcius. Take a pyrex 35cm X 24cm butter it well dust the bread crumbs and start by putting one layer of potatoes. Above it put the onions and mushrooms. Above them put the ham chunks, the corn kernels and the rest 1/2 cup of each cheese. Above all put the second layer of potatoes and lastly throw the cheese sauce. Put in the oven and bake for 30 to 40 minutes until golden. Good luck.
by Katerinain Appetizer, Main Course
Very Chocolate CakePork Chops with Grapes and Balsamico