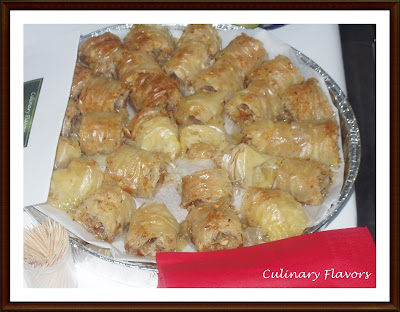 Before I tell you all about baklava I would like to take a moment and thank two very kind blog friends Karishma and Louanne for giving me the award. Karishma lives in Southern India and has a beautiful blog calledEffortless Cooking.Easy Baking and Louanne lives in of the United States and her lovely blog is called Louanne’s Kitchen. It is amazing how technology has brought together people from different corners of the world with different culture and language but with one common thing; the love and passion for good quality food. These two ladies are living in totally opposite sides of this planet and yet both have families and both offer them their love and affection through food. Thank you again very much for this award. The rule for this award is to pass it to 15 other bloggers. As I started doing this, I was trying to find to which one I will pass it and then I realized that I couldn’t choose one from the other. Each one of you who visits my blog, who spends time reading all the things I have to say and share with me this passion that is called cooking and baking is very dear to me. So, and since rules can be broken sometimes, I am passing this to all of you who pay me a visit every day and support me to this blog venture. This award is for you and your beautiful and unique blogs you have.

Tah, dah and now it’s time for my baklava. I know many of you were asking if I have posted the recipe in blog. The answer is no. In these past two years I didn’t have the chance to make this baklava. When I found out about the Bloggers camp and the fact that we could bring a treat for the other bloggers, it hit me! I immediately thought of baklava. Don’t ask me why. I don’t know. This little black box hidden in our brain, for which so much talking and analysis form scientists have been written and spoken, keeps well its secrets. Anyway, making the long story short, I made the baklava. This recipe is how we in my family make it. My mother makes it that way, my grandmother (God bless her soul) made it that way and it goes back to great great grandmothers. I like this type of baklava because the ratio between phyllo and filling bends towards the phyllo. That means that the filling is not as intense as in the traditional one, but this is my personal taste.
As you know baklava is a sweet found in many eastern countries of the Mediterranean. The difference is in the filling. In Greece we make baklava with ground almonds and walnuts. In the other Middle East countries they make baklava with pistachios. I love both ways.
Anyway, I am not going to tell you more, I will proceed with the recipe and the pictures of the steps to prepare it. I asked my mother to help me in this venture, so as to be able to take more precise pictures. In this way you will better understand how we do it. I want to apologize for the main picture. It was taken while the baklava was placed on the camp’s bench and it is not of the quality I would want. Sorry about that, but I didn’t have the time to make a food styling. I was running like crazy that day. 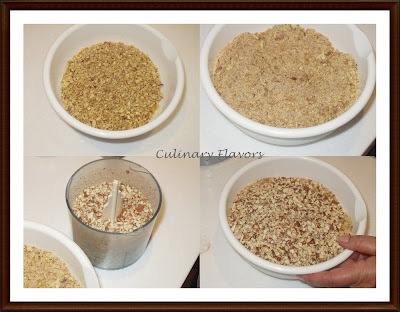 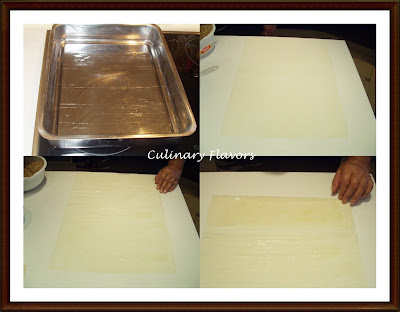 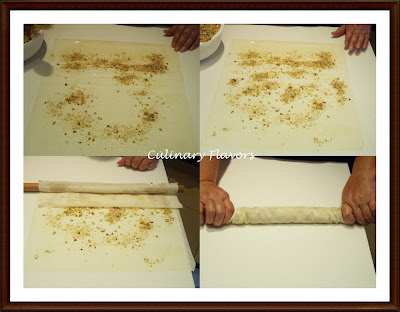 Instructions
For the baklava

If walnuts and almonds are not ground just put them in the blender and chop them. Be careful do not make them powder but small chunks. In a bowl put the ground almonds and walnuts, the breadcrumbs, the sugar and cinnamon. Mix until everything is incorporated. 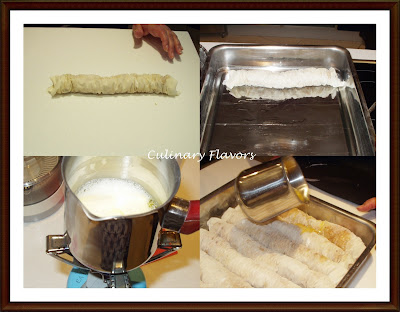 Take one phyllo leaf, the short side should face you, oil it with the corn oil. Fold approximately 10cm as you see in the pictures. Spread three hipping spoons of the filling all over the phyllo surface. Now with a thin rolling pin roll the phyllo around it. When all the phyllo is folded around the pin press gently with your two hands the two sides of phyllo towards the center. Do not press too strong or the phyllo is going to tear apart. Carefully by pushing one side of the phyllo take it out of the pin. You follow the same procedure for the rest of the phyllo leaves. You place all the pieces in an oiled pan. After you finish you melt the margarine (originally this is supposed to be butter but you know cholesterol and all that make me cautious) and throw it above every piece of the baklava. We do not preheat the oven. Place the pan on a cool oven and turn the fire on to 150° C. Baklava so as to become crisp and tasty has to be baked in very low temperature. It took about 40 minutes for the baklava to take this beautiful golden color. You have to check because each oven has different way of behaving. You will understand when it’s ready from its nice golden color. 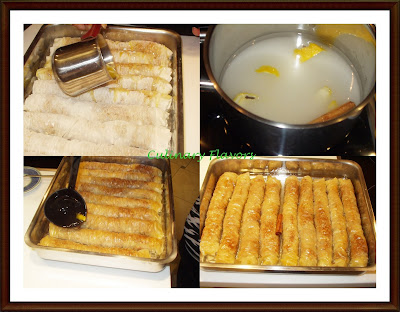 About 10 minutes before the baklava is out of the oven put all the syrup ingredients in a pot and turn on your stove to high heat. Stir only until the sugar is dissolved. From then on stop stirring and let the syrup reach the temperature of about 100° to 110°.
Take the baklava out of the oven and throw on top the hot syrup after having removed all the peels, cloves and cinnamon stick.
Let it cool and soak as much syrup as possible and then serve it plain or with a big scoop of ice cream. 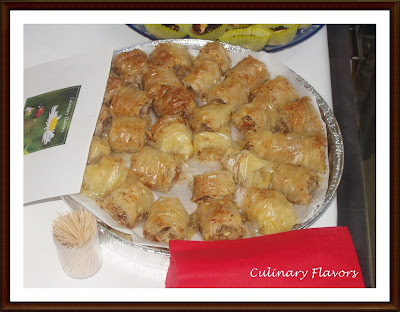