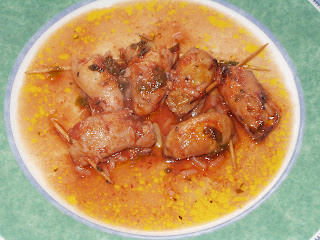 It is Easter Sunday and we ate tons of lamb, kokoretsi (which is basically the lambs’ intestines on the spit) and kontosouvli (which is pieces of pork on the spit). I made these squids three days ago and they were excellent. I totally recommend them to you. I found the recipe on a Greek magazine called “Κουζίνα & Ποιότητα Ζωής”, February-March 2000 issue. I didn’t expect them to become so tasty. Usually, I am very reluctant when it comes to recipes from magazines. Nevertheless, this recipe proved me wrong. I made some changes which I think added to the end result and I am presenting it to you.

You wash the squids and remove the tentacles from the main body, if they are not removed already. Clean everything very well and cut the tentacles in small pieces. In a pot in medium- high heat throw the tomatoes the parsley and little bit of salt and pepper, also add the basil and oregano. Bring to boil, lower the fire and let it simmer while you are making the stuffing. In a skillet sauté the onions with the 3 tbsp of olive oil, add the rice, the raisins, the tentacles, the pine nuts, salt and pepper. With this mixture you stuff the squids and close them with a toothpick, so as for the stuffing not to be able to get out. In another skillet throw the other 3 tbsp of olive oil and sauté the squids for a minute or two. Now take a pan and put the squids in it. On top throw the tomato sauce and bake in a preheated oven at 180° C for an hour. The pan is what the recipe calls for, but I thought that it would be best to bake them in a clay pot. And that’s what I did. So, if you have something that is covered, use it. If you do not have, just put an aluminum foil on top of the pan, make a few holes, so as for the steam to escape and bake. In this way you will keep squids from drying. Now, 15 minutes before you take it out of the oven uncover and let them take a nice color. I would like to wish to all of you Happy Easter. May god be with you and your families. Καλό Πάσχα!
by Katerinain Greek, Lent, Main Course, Seafoodtags: appetizer, Greek, lent, main course, onion, raisins, seafood, wine