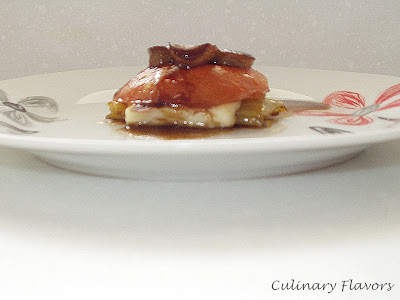 First, I want to apologize for the picture. I have to buy a new camera, because the one I have is old and does not zoom as it should. I eat this very often when we go out for dinner. So, I tried to recreate it at home and it was a success. Here in Greece they call it vegetable mille-feuilles or napoleon but neither of these is not exactly what it is. So, I gave it a new name. Halloumi is Cypriot cheese made out of a combination of cow and sheep milk or completely out of sheep milk. It is white and when you broil it does not melt. It has a unique flavor and I love it. I begun to make this because I had all these vegetables in my fridge and they would rotten. Lately, it seems that time chases me. It is because of the diet. That’s what it is. I have so many raw materials and I do not use them because of the diet. Anyway, during weekend I have the opportunity to clear my closets and fridge. So, let’s go and make it.

Salt the sliced eggplants and leave them on the drainer for 30 minutes, so as to lose their bitterness. Rinse well and put aside. Preheat oven to 200° C. In a bowl, mix the olive oil and the balsamic vinegar. Take all these sliced vegetables and slice by slice baptize them in the mixture of oil and vinegar. Place them on a baking sheet, salt them and bake for half an hour. You can use a skillet and fry them or you can use the broiler. Whatever you prefer it is fine. I used the oven, because I placed all vegetables in two baking sheets and they were ready at the same time.
In the meantime, make the dressing by mixing everything in glass bowl. Put it in the microwave at the highest scale for 30 seconds. Let it rest until everything is ready.
Now, take a skillet put 1 tbsp of olive oil in high heat and place the halloumi slices to get a nice golden color.
To assemble: Take a platter, put one layer of tomato, second layer of the halloumi cheese, third layer of a zucchini slice, forth layer the eggplant and finally the mushrooms. Continue with the rest of the vegetables and halloumi until you finish them. These quantities were enough for 15 vegetable sandwiches. On top pour 2 tsp of the dressing and serve. You can eat them warm or cold. Personally, I prefer them warm. I am sending this to Weekend Herb Blogging an original idea of Kalyn, managed now by Haalo and hosted this week by Janet from Tastespace . 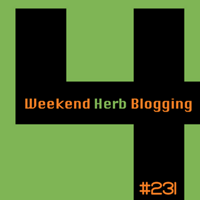